HISA travels to London for the third time for People's Vote March. 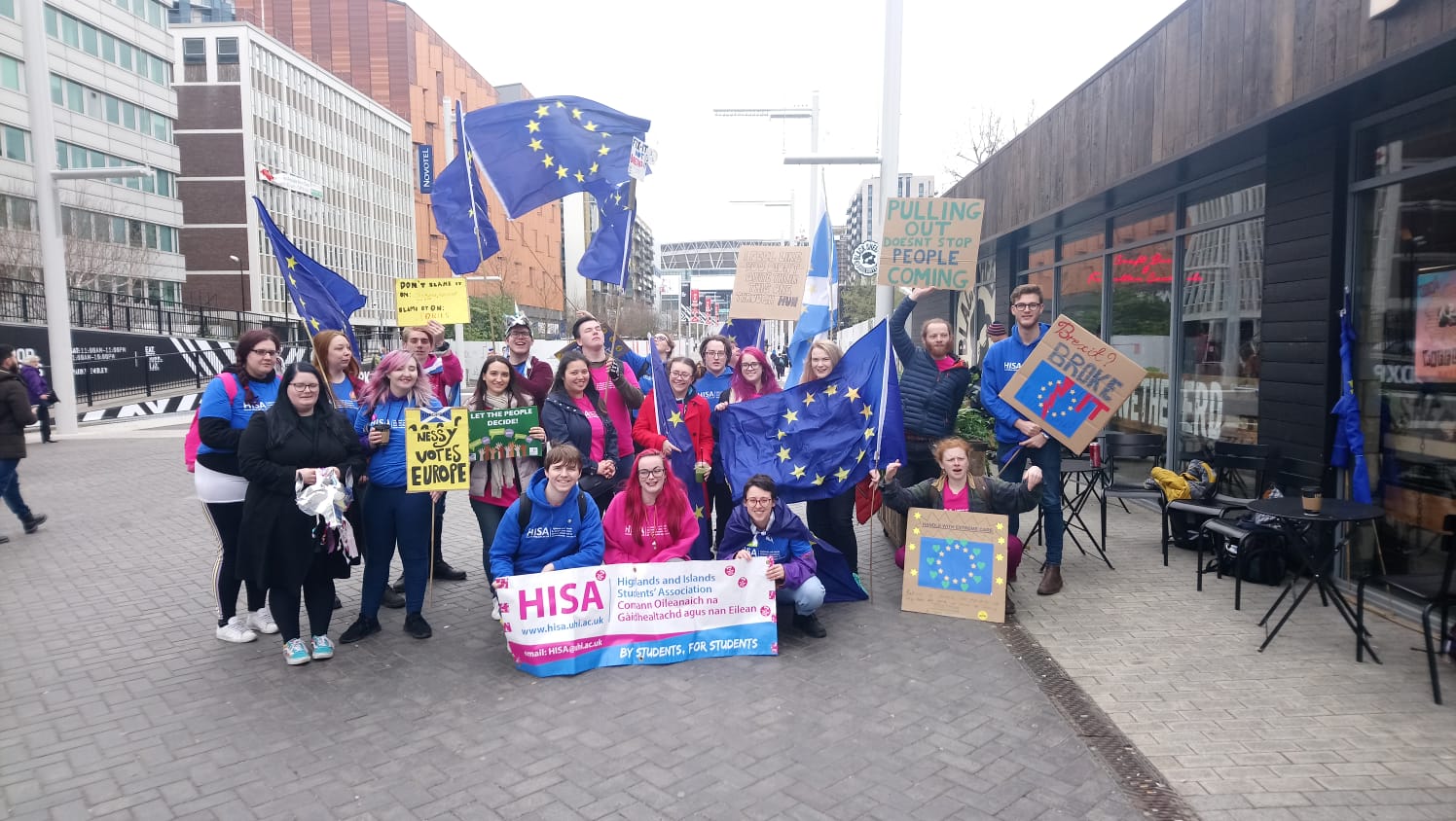 Students from across the Highlands and Islands travelled down via bus from Inverness overnight on Friday to attend the Peoples’ March in London on the 19th of October, to demand that the government gives the people a final say on the outcome of the Brexit process.

The Highlands and Islands Students’ joined hundreds of thousands of others to march on Parliament. HISA is proud to stand with their EU and International students and will continue to do everything they can to secure their place in this country, and to secure a people’s vote.

Commenting on the effects Brexit will have on her studies, HISA Lews Castle College Depute, Florence Jansen said:

“Being able to attend the People’s Vote in London is so important for students from UHI, especially Island communities. It’s not always easy to stand up for our beliefs, however, we are living in one of the areas that will be most impacted by Brexit. It has turned into an overcomplicated, scary and very real situation for myself and other EU students. The government is not giving us the answers we need and doesn’t seem to care.

The insecurity and uncertainty is causing stress that should not be put on any student’s mental wellbeing. When I started my studies in Stornoway I made a choice to contribute to the community and student life here, Brexit makes these contributions seem invalid and often makes me as an EU student feel unwelcomed. It is like sitting between the seats. I shouldn’t have to worry about whether or not I can finish my studies if I will be able to afford extortionate fees in a year’s time or will be forced to leave the country I now call home.

So many opportunities will be lost for so many as a direct result of Brexit.  The government is acting in such an irresponsible way by trying to make out the effects will be minimal. They are making decisions that will directly impact our lives, our students and our communities in an awful way.  I can’t stand by and just watch without acting.”

Ahead of the march, HISA Vice President of Higher Education Andrew Bowie said:

"It's really exciting to be able to have the chance to take this group of passionate students down to London with us. This is a moment in history and one that will affect every single person in the country, young people and students most of all.

We are also very proud at the University of the Highlands and Islands to boast a diverse community of students, and our international and EU students are one of the cornerstones of this fantastic diversity. It will be a travesty if more of them are forced to leave Scotland as a result of Brexit.

We are marching in support of a people's vote, to give all the people of this country their rightful chance to have the final say on the UK’s relationship with the EU. Young people who were not heard last time deserve the right to be, and we are proud to be championing their voice this weekend."