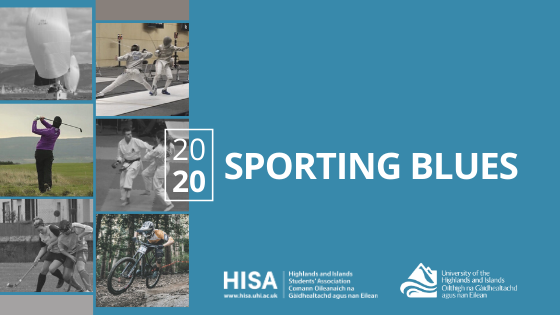 Sporting Blues were created to highlight the outstanding sporting achievements of our amazing UHI students. These prestigious awards are presented to sportsmen and women who attain an exceptionally high standard of performance in their sport. #TeamHISA is incredibly proud of all the phenomenal students at UHI, who manage to balance studying while representing their university, playing at Scottish and British University level with some even representing their country at international level. Sporting Blues are how we hope to recognise the huge sporting talent at UHI and we need YOU to let us know who those students are!

The UHI Sporting Blues awards scheme was launched in March 2017 and recognises the sporting achievements of our students, regionally. The awards scheme - which is a joint initiative between the university and HISA - was proven to be very successful in gaining candidates in the first three years, and there was a total of eighteen winners last year. This year, we are looking for even MORE nominations from all the UHI athletes out there to ensure they are recognised for their amazing achievements! We would also like to urge staff to nominate outstanding students as well as influencing students to either nominate themselves or fellow athletes.

What are the Sporting Blues?

Who are the Sporting Blues open to?

Please use the forms below, which will be live on 1st April 2020.