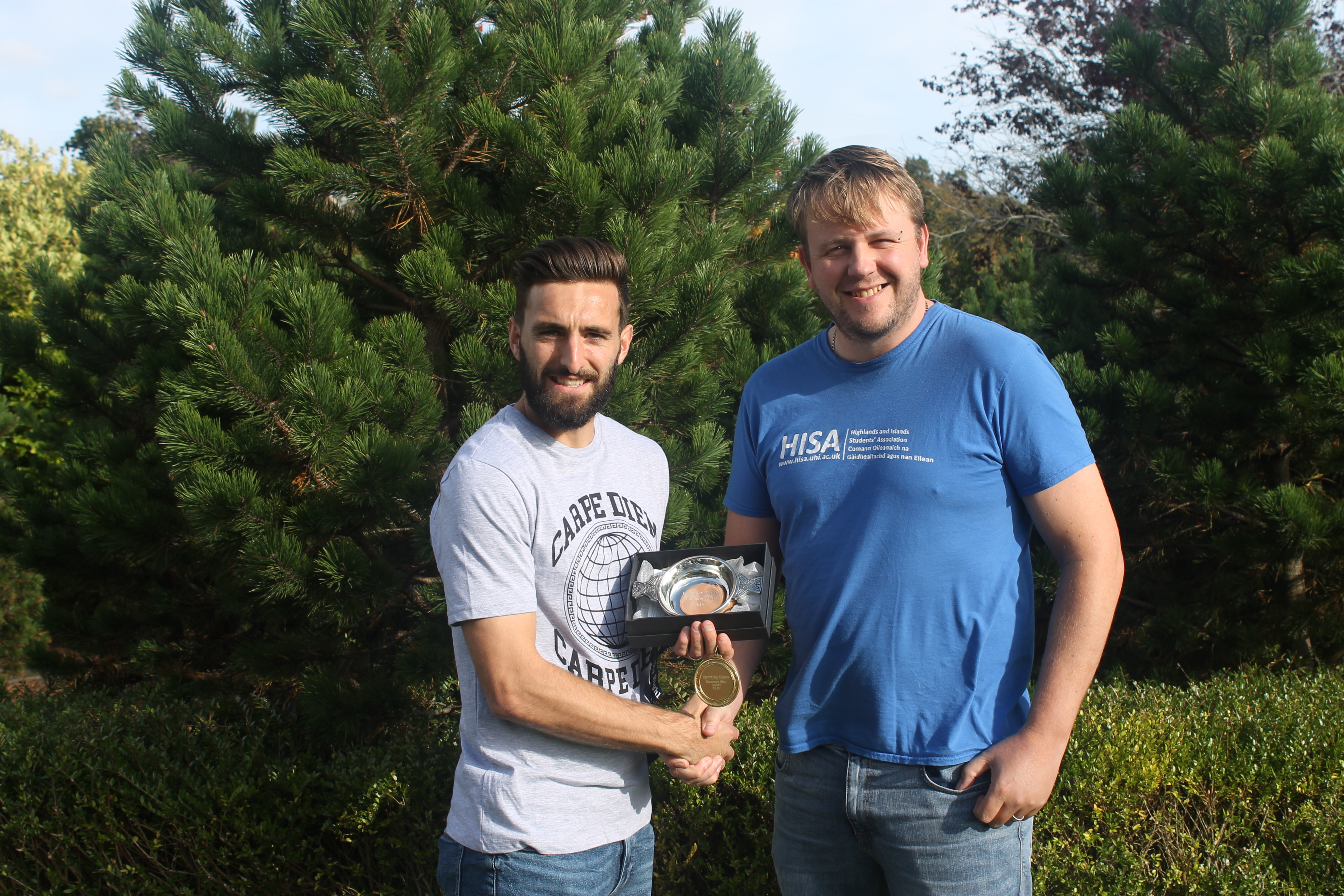 Graeme (28), from Inverness, completed a part-time NC in Sports and Fitness at Inverness College UHI in 2009 whilst he was playing for ICTFC U20s. Having previously played for Inverness Caledonian Thistle, Forres Mechanics, and Aberdeen, Graeme made his first international appearance for Scotland in May 2018 and now plays for Derby County as a left-back or central midfielder.

The Sporting Blues awards scheme is a joint initiative between the university and HISA, with the Blues being awarded at graduation ceremonies to our student winners. This year, a record-high number of nominations were received. The Honorary Blues are awarded to athletes connected with the University who have made outstanding contributions to Scottish, British or World Sport.

Graeme was presented with his award at the university’s Executive Office on Friday by HISA President, Alan Simpson, along with Key Account Director, Gary Campbell, and Kirsten Grant, Depute Head of School for Care, Health and Wellbeing, at Inverness College UHI. He spoke about how much he had enjoyed his studies and his pride in being one of this year’s recipients of an Honorary Blue from the university. Graeme was joined by his wife, Jodie, with whom he has two children.

When asked about the benefits sports can have on students, Graeme said: “Sports can definitely encourage students in learning different disciplines, it can help with a lot of things, including mental health - sports can provide you with a space to meet people and speak out about certain issues that people might not have felt comfortable doing otherwise.”

Depute Head of School for Care, Health, and Wellbeing, Kirsten Grant, spoke of the fond memories she has of teaching Graeme back in 2008: “Graeme was one of the development players we had coming in once a week on a Monday and they were a great bunch of students to have, and always a lot of fun. We focussed on human physiology and personal fitness, which has hopefully helped them with their footballing careers. It’s great to see an ex-student like Graeme doing so well.”

HISA President, Alan Simpson, commented: “Being able to showcase exceptional sporting achievements like those of Graeme is very rewarding. We hope that his success will inspire other UHI students to participate in sports at a professional level. Sports is ever-growing, and it’s wonderful that HISA can highlight those students that have excelled out with their studies.”

Dr Iain Morrison, Dean of Students, added: “Our talented students never fail to amaze me with their academic, artistic, sporting and musical talents. These awards highlight the extraordinary achievements of the elite sports people at our university. There are some exceptional individuals recognised today for their national and international success across a range of sports, as well as a few who are building significant reputations in their specific fields. It is a considerable honour to be awarded university blues and colours and we are proud to celebrate the achievements of each and every one of them in this way.”